The following is a post from Duc Tran, PGY-4 and 2019 recipient of the Yale/Stanford Johnson and Johnson Global Health Scholarship to travel to Uganda

I am two weeks into my trip, and have started to settle in quite nicely. The program placed two internal medicine residents, one from Yale and the other from Stanford, and myself at Makerere University in Lincoln Flats. It’s a little apartment, but we each get our own rooms, equipped with a mosquito net and a fan, which I need to manually turn at least 20 times before it would spin on its own. Running water, or lack there of, proves to be a challenge. We have to plan ahead for showers, as we wouldn’t know when the water will turn on next. But on the positive, since there is no water pressure, I’ve learned the necessary skill here of showering with a bucket.

Kampala, the largest city in Uganda, has divided its healthcare into two hospitals, the Mulago Hospital, which sees mainly surgical patients, and Kirrudo Hospital, which see predominately medical patients. The first two weeks, I’ve mainly been based at Mulago. While it is the country’s only surgical referral center, the hospital sees an overwhelming amount of road traffic accidents. Most people in Uganda get around with Boda Bodas, the colloquial term for small motorcycles. I would estimate the Mulago ER see over 90% traumas, with boda boda accidents making up the majority, and mob justice comprising the rest. This place sees its share of displaced long bone fractures, LARGE lacerations, but the most challenging cases are head traumas. Ambulance services would bring and plop patient right on the concrete floor, as free stretchers are often not available. These patients have significant external head injuries and altered mental statuses; patients who would undeniably be triaged as a Trauma CODE at Barnabas. CT brains scans are available, but will take at least a day to be done, as these patients typically don’t come in with family members who are the up-front payers for medical services. In such cases, waivers are filed, and are approved by administrators after a day. However, most of the patients with head injuries will not have gone for a head CT scan without arresting from likely aspiration first. In as single shift, having a row of at least five patients of road traffic accidents actively decompensating in front of you is not uncommon. These patient’s without a doubt would be intubated on arrival in the US. Unfortunately we cannot adequately protect a patient’s airway or oxygenate them here. I think equipment for intubation is available; however, ventilators are in short supply and are almost always in use by the ICU. The culture here is to place an oropharyngeal airway in altered patients in hopes of displacing the tongue enough to get a somewhat respectable oxygenation. Oxygenation does improve by this method, but it it also seems to increase the incidence of aspiration. I have not thought of a better solution. The majority of patients who pull through are the ones with relatively minor head injuries, and may have survived regardless of the limited interventions. Although the types of traumas here are what we would see at the Barnabas ED, they wear on me much more because of my feeling of helplessness; knowing very well what to do, but not being able to do it. I really don’t know how the doctors here cope, and wonder how I would fair after a year. Though its been a tough two weeks, I consider myself fortunate to have just glimpse at what being a doctor is like over here.

Near the end of last week, I had met Mary, an EM doctor from Yale, who is working on her global health fellowship; she is helping train the first EM residency in Uganda. She invited me out to work in Kirrudo, the medical ER. I’ve only spent two days there last week, but I am already having a more positive outlook on my experience here. Currently the EM residency is in its first year, and only a few months in at that. They’re a great bunch, but they have limited guidance. Being the first EM residency, there is no EM trained physician here; their program director is an anesthesiologist who seems to not be around much. A few big named EM residencies in the US have promised support by sending over EM faculty to train the residents, but it seems their collective time spent here is sporadic and short at best. Working with the residents have shed light onto what a unique bunch of physicians we EM doctors are. Without guidance, residents here don’t learn that go-getter, scrappy attitude that really sets EM physicians from the rest. And I think that is discouraging them. Most of the what the residents here know about medicine is through the optics of individual specialities. Residents know how to approach patients from the perspectives of the consultants when the patient is stable on their perspective wards, but don’t know the emergency side of stabilizing, diagnosing and managing patients until that point. Residents would see patients one after the next, in the order they arrive, regardless of acuity. A resident may be seeing a patient with a chronic diabetic foot ulcer; they would interview the patient and write up the chart before they move onto a the patient who is in severe respiratory distress, assuming that patient is next. But I really can’t blame them, as this is how the non EM doctors that train them practice. Mary has been trying to change that since she got here. She is doing a great job, already within a few days of me being there, I can see the culture change. There is now a sense of urgency in the residents. On arrival of an unstable patient, they all drop what they are doing, and work together, reminiscent of the residents at Barnabas. They are turning into real emergency physicians. It’s a small step, but in the right direction. The potential is here, the residents just need some guidance. Working with these residents have made my time much more enjoyable, and I hope to work with them more in the weeks to come. As I’m only here for a short time, I never did think that I could have any real impact, but I’m starting to think that I can possibly do a little something good with this residency. 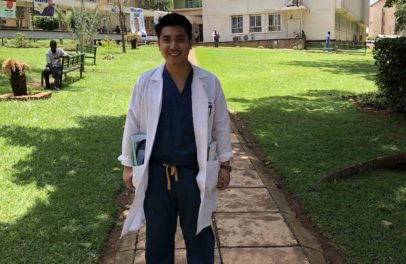 The following is a post from Duc Tran, PGY-4 and 2019 recipient of the Yale/Stanford... END_OF_DOCUMENT_TOKEN_TO_BE_REPLACED

Toxicology Literature of Note In NY and NJ, anyone is able to walk into a... END_OF_DOCUMENT_TOKEN_TO_BE_REPLACED

Toxicology Literature of Note Here is a fascinating case of a 17 year old male... END_OF_DOCUMENT_TOKEN_TO_BE_REPLACED