Creating an Asthma Center of Excellence 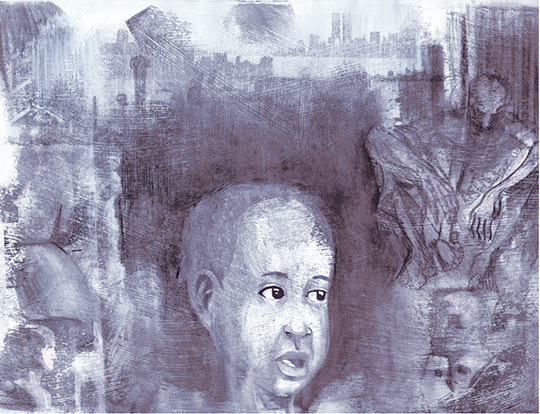 Asthma is as indigenous to the Bronx as malaria is to sub-Saharan Africa. The Bronx’s asthma death rates are three times higher than the United States’ average, with hospitalization rates for the borough soaring even higher. Double the number of children with asthma live in certain sections of the Bronx than in areas only a few subway stops away in Queens and Manhattan.

And, it’s a leading reason for why the Bronx, for nearly a decade, has maintained a death grip on 62nd and last place in the state when it comes to health outcomes.

In 2017-18, BPHC and the Northwest Bronx Community & Clergy Coalition (NWBCCC) introduced the Bronx Healthy Buildings Program, with the intent of “holistically addressing the root causes of morbidity among asthma patients and reducing asthma-related emergency room visits and hospitalizations.”

Beginning with home visits that involved educating residents on proper medication use, the program quickly expanded.

“The point is asthma is an environmental epidemic, and out of 100 patients we would call on, we would only get into the homes of 30,” says Dr. Moon. “Our overall success rate was 38 percent, at a cost of $2.6 million. That was not good enough.”

Adds Bronte Kastenberg, project manager of clinical improvement projects at BPHC, “Someone can have an ED visit and go get their inhaler and all their medications, but if they are coming home, where the paint is peeling off the walls and there is mold, then the medication is only going to do so much.”

This meant a transition towards a population-oriented and place-based engagement strategy that resulted in outreach to 35 buildings (including NYCHA public housing) with high rates of asthma-related emergency room visits and hospitalizations and high rates of building code violations. Landlords in these buildings were required to make capital improvements (from new boilers to new windows), which included cost-effective, energy efficient and health upgrades, air quality improvements and general structural repairs. Home-based asthma interventions were initiated, tenant leaders were trained in social determinants of health, and pest management contracts were secured. Asthma resources were diversified by increasing partnerships, such as with a community health network to train homecare attendants and community pharmacies to deliver medicines and educate recipients.   An app, RxHealth, was deployed to enhance the interaction between PCPs and their patients.

Pre-intervention surveys found that among residents of these buildings:

The Changing Role at SBH

In its pursuit of becoming an asthma center of excellence, SBH has doubled down on making changes to heighten patient accessibility and fill in much-needed gaps in care.

“I am working very closely with SBH on a project aimed specifically at reducing potentially preventable emergency department visits (PPV),” says Dr. Amanda Ascher, Chief Medical Officer at BPHC. “Together, as a group, we looked at a list of state reported PPV and found that over 90 percent of them were asthma related. Now, I am working with the emergency department and the ambulatory folks on how to target the asthmatics better. How can we make sure everyone has an asthma action plan? Are vaccines up to date? Has tobacco counseling been addressed? How can we make sure every one of our highest risk patients has a nebulizer at home?

The hospital, as a result, has developed a “bundle” of measures to move forward on. This includes immunizing patients to prevent exacerbations; making sure patients have an action plan so they can better manage their disease; getting smokers to stop smoking; encouraging the use of digital resources like RxHealth; and making sure those with very severe or atypical asthma have access to special medicines (such as biologic therapy). Resources like community pharmacies and paramedics are now part of the overall care equation.

“Because asthma is such a prevalent condition in our community, we see a lot of people in primary care who not only have asthma as their only diagnosis, but as a constellation of a variety of different illnesses,” says Dr. Gurunathan. “In the primary care setting, it is our job to try and identify and make sure people are getting very basic preventative care and health maintenance that is related to having asthma, and also identify those people who would benefit from, say, extra pulmonary support.”

Much of this comes down to changing processes, so asthmatics won’t fall through the cracks.

“Take the case of the patient who had a nebulizer prescribed by our PCP and then went to her pharmacy to fill the prescription, only to find the pharmacy doesn’t dispense them,” says Dr. Ascher. “So the patient, without a nebulizer, ends up back in the ER. Now, with that patient referred to community paramedics, who fixed the problem, everything has worked out to keep her out of the ER.”

On a practical scale, according to Dr. Raghu Loganathan, Director, Division of ICU and Pulmonary Medicine, adults and children now have access to same day appointment. A pulmonologist sees all asthmatics coming through the emergency department or admitted to the hospital. A special program is focused around the high risk, high utilizers of services. To eliminate gaps in care, patient navigators provide outreach to make sure they get referred to the necessary services.

Adds Dr. Loganathan, “We take it very personally now if a patient ends up in the ER or needs to be hospitalized.”

A momentous day at SBH, staff at the hospital began to receive the Pfizer Covid-19 vaccine. Nursing supervisor Clover Mclennon was the first person at SBH to get the vaccine. END_OF_DOCUMENT_TOKEN_TO_BE_REPLACED

Dr. Bert Petersen and Dr. Ruth Cassidy give News 12 a tour through the soon-to-open Women’s Imaging Center at the new SBH Health and Wellness Center, stressing the importance of... END_OF_DOCUMENT_TOKEN_TO_BE_REPLACED

Dr. Ronald McLean has been named the new director of the Center for Wound Healing and Hyperbaric Medicine at SBH Health System, replacing the late Dr. Ronald Verrier. A general... END_OF_DOCUMENT_TOKEN_TO_BE_REPLACED