Beyond The Lab Coat: The Fantasy Football Fanatic

Do you select Arizona running back David Johnson or Jets’ wide receiver Brandon Marshall in the first round? Do you grab the Giants’ Eli Manning in the 8th round, or wait until round 11? And, once you’ve drafted your team, do you sit your starting tight end in Week 10 because he never catches many balls against the Bears defense when playing on frigid days in Chicago? 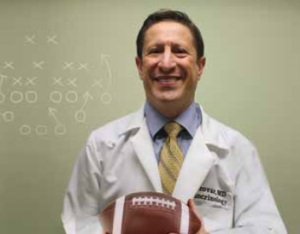 are the kinds of dilemmas faced every football season by Dr. Gilbert Brovar, an endocrinologist at SBH Health System, and about 75 million other Americans devoted to fantasy football. Only Dr. Brovar is a little more serious about it than most, and much better at it.

In addition to competing in several high stakes leagues – one has more than 2,000 participants and pays out $300,000 to the first place team – he advises others who struggle with the same decisions. His counsel, like that of a swing coach in golf or a grand chess master, is in demand because of his sterling track record. Last year, his team – which he shares with a “co-owner” (who is so involved in fantasy football that it’s now his full-time job) – won $10,000 by finishing 15th out of 2400 teams.

While fantasy football leagues have subtle differences, most work in the following way: leagues hold a “draft,” where teams select NFL offensive position players (quarterbacks, receivers, running backs) and an NFL defense. Each team names a weekly starting lineup during the season from these players, with points awarded for players’ rushing, receiving and passing yards; touchdowns; and receptions. Win-loss records – as teams face off head-to-head each week – and a system of allotted points comprise their overall standing.

Like the general manager of an NFL team, Dr. Brovar spends hours studying prior to the draft. This includes perusing NFL team rosters and pouring over online fantasy football charts which rank players’ historical performances. This helps him decide on choosing player A over player B in the early rounds and uncovering sleepers for late round picks. For his high-stakes league, the draft takes place before the start of the NFL season in a hotel ballroom in Las Vegas, with each team’s selections placed on a big board.

Strategy also goes into drawing up your weekly lineup. For example, you may choose to start a player because he has consistently done well against the team faced that particular week. So, if the Patriots are playing the Jets, explains Dr. Brovar, this may mean starting Julius Edelman as your wide receiver rather than, say, one with greater overall productivity because the Patriot has averaged about a dozen catches per game in recent years against New York.

Obviously, luck is also involved. Injured players (or, as happens all-too-often in the NFL, those suspended for off-the-field activities) can put a fantasy team on life support.

As for Dr. Brovar, he says he finds himself glued to the TV every Sunday (and Thursday and Monday nights) when NFL games are played.

“Fantasy football has been great for the NFL,” he says. “Sunday night I’m watching a game between (doormats like) the Cleveland Browns and the Tampa Bay Buccaneers, and so are most fantasy players. How else would the NFL get people to watch a game like that?”

For the 100th episode of SBH Bronx Health Talk, Dr. Perlstein, President and CEO of SBH Health System, and Bronx Congressman Torres discuss where the Bronx is today and where... END_OF_DOCUMENT_TOKEN_TO_BE_REPLACED