‘Maybe the IUD’ Is Right For You?

A new city program is intended to prevent unwanted pregnancies among women who recently gave birth.

While the teenage pregnancy rate has declined slightly in recent years, there is still a critical need to educate young mothers in the Bronx on how best to prevent future unwanted pregnancies. As a means to this end, SBH Health System is one of several NYC hospitals participating in the QINCA (Quality Improvement Network for Contraceptive Access) program.

“Yes, the unintended teenage pregnancy rate in the Bronx is down, but we still have a much higher rate than anywhere else in New York City,” says Dr. Marina Arutyunyan, an obstetrician/gynecologist at SBH. “The goal of this program is to improve access and quality of contraception both before unintended pregnancy as well as postpartum to our most vulnerable teens.”

Part of the program inv 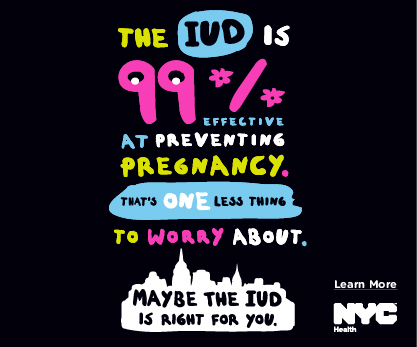 olves offering the best available contraceptive options to postpartum women, including long-acting reversible contraception. New mothers
will have an opportunity to have an IUD or subdermal implant placed while still in the hospital rather than in the doctor’s office at the six-week postpartum visit.

“Although we strongly encourage all patients to follow up for postpartum visits, this is particularly important for new mothers who are unable to make it back for that visit,” says Dr. Arutyunyan. “The patient now leaves the hospital with the contraceptive device in place, confident that she is well protected against unintended pregnancy. These devices are equally as effective in preventing pregnancy as permanent sterilization, but have a low complication rate and can be reversed once the woman chooses to become pregnant again.”

Dr. Arutyunyan says that once she educates young moms on this option, a majority of them opt to have it.

“This project is certain to make great strides in increasing patient safety and contraceptive access to all options, and helping decrease unwanted pregnancy,” says Dr. Arutyunyan. “We’re happy to partake in this initiative.”

For the 100th episode of SBH Bronx Health Talk, Dr. Perlstein, President and CEO of SBH Health System, and Bronx Congressman Torres discuss where the Bronx is today and where... END_OF_DOCUMENT_TOKEN_TO_BE_REPLACED