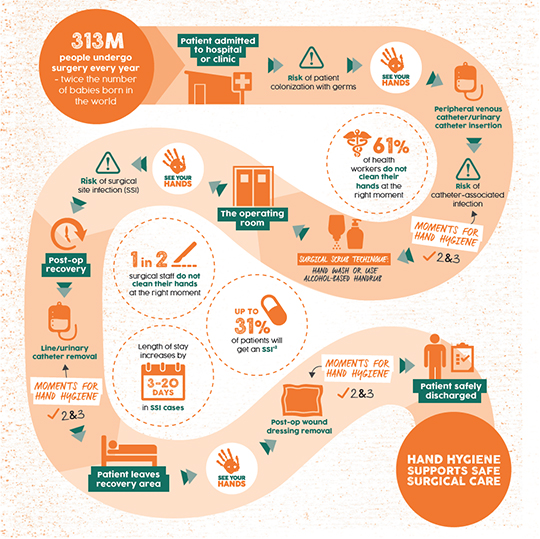 A manager from the hospital’s Environmental Services Department (ESD) uses a wand-like device to swab the door knobs, bed rails, TV remote and other “high touch points” in the patient’s room after it has already been disinfected with bleach or hydrogen peroxide gas to stop the spread of spores from the Clostridioides difficile bacterium. Extremely common and contagious within the hospital environment, C. diff can live on surfaces for as long as five months.  The wand is then placed within a hand-held computer, where seconds later a number measuring the Adenosine Triphosphate (ATP) particles found on the surface is emitted. The number on the computer screen reads 29, slightly over the threshold, which means the room must be re-cleaned and re-inspected.

This is one small, but critical part of an intensive, multi-pronged campaign that SBH has undertaken to reduce the rate of hospital-acquired infections. This includes the number of C. diff cases, as well as the rate of central-line associated infections (CLABSI), catheter-associated urinary tract infections (CAUTI) and surgical site infections (SSI), including those following colon and hysterectomy surgery. The effort has proven enormously successful – to the point where ZERO infection certificates awarded to patient floors has become more the rule than the exception.

“People’s thoughts and perceptions have changed from ‘We have a difficult patient population that tends to be sick, has more complications and gets more infections, so how can we get down to zero hospital acquired infections?’” says Dr. Daniel Lombardi, vice president/associate medical director, chief quality and patient safety officer at SBH. “The first piece of the campaign was awareness and the second was understanding the definitions. Each one of these hospital-acquired infections has its own set of rules. C. diff is different from the catheter-associated infections, which are different than the surgical site infections. We really had to understand them in depth. It took a lot of education.” In terms of culture, there has been a paradigm shift. “There was some resistance at first because no one really thought we could get down to zero,” says Dr. Manisha Kulshreshtha, vice president/associate medical director, medical affairs. “We saw that other hospitals had data showing this, but we frankly didn’t believe it. Our feeling at the time was that patients are going to get infections no matter what we do and it was just a question of how we treated them, being more judicious, for example, in our use of antibiotics (a cause of C. diff.) Education was the very first step in getting people to start believing change was possible.”

Hospital-acquired infection rates, at the time, were “off the charts,” says Dr. Lombardi. “Our C. diff numbers were ridiculous. We had a lot of patients coming in who had C. diff and we couldn’t get a handle on it.”

Dr. Judith Berger, director, division of infectious diseases at SBH, has been a point person for much of the improvement, along with Dr. Edward Telzak, chairman of internal medicine, and Drs. Lombardi and Kulshreshtha.   She speaks about infectious diseases like C. diff and the effort made at the hospital to curb it with the passion of a food connoisseur rhapsodizing over a meal at a four-star restaurant, or a baseball scout after watching a five tool player.

She started a campaign called “Stop C. diff at the door” to halt its spread from patient to patient. This involved the introduction of new protocols, in addition to the use of the wand, such as employing a stronger disinfectant to clean patient rooms and ORs, initiating molecular testing for patients suspected of the disease once they enter the ER and replacing the system of sending out stool specimens, which can take five days, to having it done in-house, which can be completed within an hour.

“If the stool test is positive now, the patient remains on contact isolation and they get treated,” she says. “If the test is negative, they get taken off the treatment and go to a regular room. Right away, we are stopping the spread by identifying who has it and who doesn’t.”

This, she says, has helped the hospital better define community-acquired onset from hospital-acquired cases of C. diff. According to Dr. Berger, the hospital is also monitoring those patients who are on more than four days of certain antibiotics such as Vancomycin or protein pump inhibitors to decide whether they need to continue on them.

The CLABSI and CAUTI committee chaired by Dr. Telzak, include representatives from across the spectrum – infectious diseases, nursing education, the emergency department, the NICU, ESD, IT and administration.

This has meant decreasing the use of catheters whenever possible and making sure they are being used properly in a sterile manner. It has led to the creation of policies that include putting in midlines rather than central lines for giving antibiotics for such things as bone and heart infections, and avoiding, whenever possible, the use of femoral lines, where there is a higher incidence of infection (placing these lines instead in the groin, where there is less chance of infection).

Dr. Telzak and other members of the committee started going on daily rounds to see whether individual patients could have their catheters removed to eliminate the likelihood of infection. “So the committees started out making policy by asking questions,” says Dr. Berger. “What are the indications for a line? When do they need to come out? It was the same with surgical infections. Is the OR sterile? Are people preparing themselves properly for surgery? What is being used to disinfect the surgical site? How is the wound being taken care of afterwards? Does the patient have a history of MRSA? If they are putting in a prosthetic device, should it be colonized for staff before surgery?”

A major piece of the campaign has involved the use of hand hygiene protocol. Proper hand hygiene is one of the Lean Daily Management metrics, with a member of the senior management team conducting daily observances for several months now.

“This year we began a hand hygiene pilot project in the ICU and IMCU centered on the hand hygiene pledge,” says Dr. Jay Hawkshead, director, infection control at SBH. “We are also monitoring compliance using a more detailed data collection tool that will give us insight into the nature of lapses in hand hygiene and other infection control practices. Additionally, we have emphasized the need for workers to promote good hand hygiene among their colleagues, as well as to observe World Health Organization guidelines for hand hygiene, particularly the ‘5 Moments for Hand Hygiene’ approach, and the need to devote adequate time to disinfecting their hands (at least 20 seconds, rather than the 5 to 10 seconds typically seen in practice).”

Other service areas have also participated in the campaign. IT has become an integral part of the process by creating order sets within the EMR to make sure documents can be tracked. Finance was brought to the table to discuss value-based purchasing, with hundreds of thousands of dollars already saved with the elimination of penalties it had previously incurred for poor results.

“Everyone understands there is a ticking clock and that we need to get it done,” says Dr. Kulshreshtha. “That kind of awareness wasn’t there before.   Our residents are now well-versed in the campaign. When I was an intern, I knew nothing compared to what they know now. I’m sure I had patients with C. diff and patients who were fully catheterized. The nurse at discharge would say, ‘Doc, what do we do?’ You didn’t know. You took care of patients and sent them home. Now the residents know all about central line infections and C. diff. The nurses know it. It’s all about patient care and getting the right treatment for the right patient.”

Adds Dr. Lombardi, “When you have all these people looking at the same thing, you are bound to be successful.”

For the 100th episode of SBH Bronx Health Talk, Dr. Perlstein, President and CEO of SBH Health System, and Bronx Congressman Torres discuss where the Bronx is today and where... END_OF_DOCUMENT_TOKEN_TO_BE_REPLACED